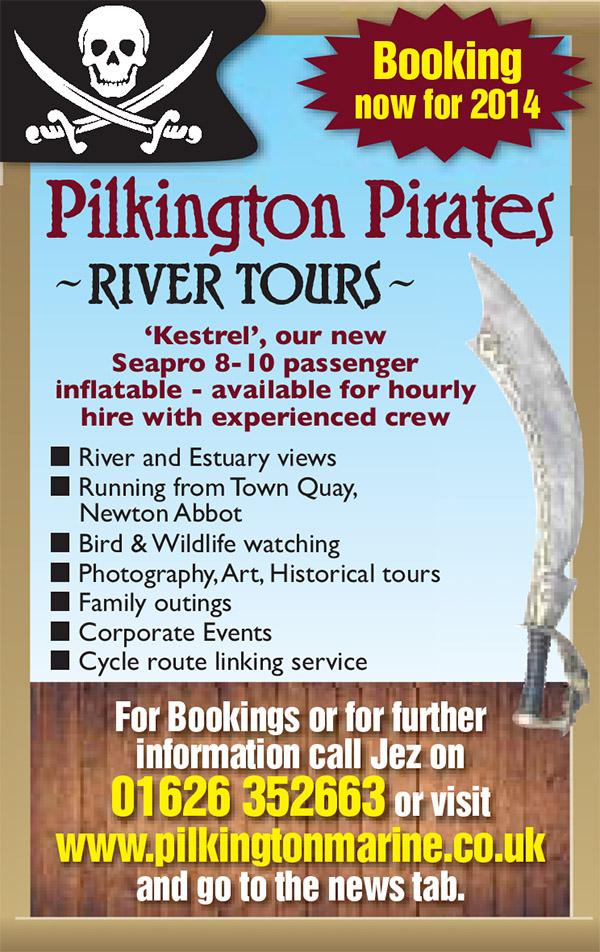 From early 2014 our new SEAPRO shallow draught 8-10 passenger inflatable ‘Kestrel’ will begin operating Boat Tours on the River Teign and surrounding waterways, from Newton Abbot’s Town Quay, opening up access to some of the most inaccessible, fascinating and beautiful stretches of water and wetland in the South West. 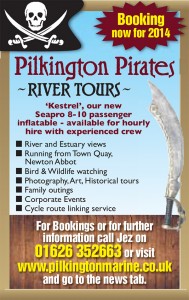 Please let us know your availability dates and we will do our best to accommodate you.

Please enter your contact details and as much detail as you can about your problem. We will get to you as soon as we possibly can.

One of the bird names used by vessels working around Newton Abbot’s Town Quay in the late 19th and early 20th century. We have continued with the tradition in this new venture. We will continue the theme as other types of craft enter service.

‘Kestrel’ and her experienced crew can be hired by Groups, by the hour, for River and Estuary Tours, Bird and Wildlife Watching, Photography, Art, Historical tours, Wedding parties wishing to arrive by water, or just for a Cruise to Teignmouth and back (or not, if you wish to stay there) Also, there will be scheduled trips up the river and down to Teignmouth with individual places available.

We will offer a service to carry bicycles between Newton Abbot and Teignmouth, filling the gap until the new cycleway is completed.

The upper reaches of the River Teign are very beautiful and abound with wildlife, The waters are mostly inaccessible, even by boat. This was a major consideration when choosing the type of vessel to put into service, With ‘Kestrel’ we believe we have it right.

The tidal waters and wetland adjacent to Town Quay and the newCycle/Pedestrian Bridge are diverse and complex. Very large Carp, Pike, Brown Trout, Sea Trout and Salmon share the River Teign at Newton abbot with breeding Sea Bass, Grey Mullet, Crabs and Eels. The largest Flounder ever caught came from the Teign. We found a pearl in an oyster last year – it’s in the local museum now.

Occasionally, a seal will find it’s way up the river, Otters have been sighted (though their location is secret), Mink roam freely. And was that a crocodile you saw under the branch where the Python is sleeping???

The cross section of birdlife is amazing. Ravens, Buzzards and Peregrine Falconspatrol the skies over the reed beds. Warblers and other small wetland birds are constantly on the alert. Herons, Egrets, Cormorants , Grebes and many other water birds are common and from time to time a large number of ‘Twitchers’ will descend on the River as some ‘exotic’ species is sighted. The Kingfisher in flight remains one of the most exciting sights. The River Teign is home to quite a number of these beautiful birds.

Insect life abounds and it is doubtful if anyone has the full list of plants which inhabit the marshlands and banks of the waterways.

Newton Abbot and it’s Town Quay have a maritime history. Humphrey Gilbert, a local seafarer stepped ashore at St Johns, Newfoundland in 1583 and claimed it as an English colony. Compton Castle, home of the Gilbert family still exists and is open to the public as a National Trust property.

For over two centuries there was a steady trade between the Port of Newton Abbotand the Cod Fisheries of Newfoundland. Sailors gathered in The Newfoundland Inn or the Dartmouth Inn in the hope of joining ships bound for the cod fishing grounds. A steady trade flourished in the town, making equipment to supply to the ships.

The Stover Canal was built in the 18th century connecting the ball clay workings and granite quarries with the River Teign. The Stover Canal Society was formed to preserve and restore the canal. The work goes on.

The Vikings used the river to reach Kingsteignton. They failed in their endeavours, it’s still there!

Stand By To Be Amazed!